A good friend of mine sent me this article after reading my previous ramble. Here are some choice snippets from that article that resonated with me.

Focus on teaching values than rules. Instead of, "Here's the list of things that you're allowed to do and not to do," say, "Here are the principles that are important in this family, and let's talk about how you want to express them."

I have been guilty of creating or enforcing rules.

I am not a rebel in any stretch of imagination. But even I refuse to follow rules without getting a background for why that rule exists. I have to buy into a process in order to follow it. It is only fair that I provide the same for my son. This does not mean there are no more rules, but every rule will come with an explanation.

"Here are the rules we have. And this is what they mean to us. This is how they really connect with our core values."

"Kids are much more likely to think in original ways if you teach them in conditionals rather than in absolutes."

Instead of saying, "This is a book," teach them, "This could be a book."

In other words, teach a child to question the assumptions rather than accepting that there is one right answer. This reminds me of the Candle problem.

If you take five students and put them in a brainstorming group together, you will get fewer ideas and less original ideas than if you had taken those same five students and let them work independently, in separate rooms, by themselves.

You put kids in separate rooms, what you get is all of the ideas on the table, and then you can bring the group together for what the group does best, which is the wisdom of crowds. The evaluating.
That technique is actually called brain writing.

This is a suggestion for a classroom setting but I think it has great potential for adult teams at work. Imagine coming to a meeting with a your ideas written down and debating the merits of each idea instead of coming up with ideas in a meeting and having to defend it at once.
Procrastination can lead to originality:

Great originality comes from being quick to start but slow to finish. That when you dive right into a task, you close yourself off to incubation. If you finish early, you're stuck only with your most conventional ideas, your first ones.

I want to thank Paul for sending me the article. I think I've picked up a few neat tricks.

Sempi and I are playing with Legos. I'm building a small mars rover for him, which he has tasked me to redo for the fifth time because it didn't quite measure up to his satisfaction.

In a desperate attempt to impress him, I started building yet again. I noticed I only had one of the 6 hole blocks and needed a matching pair to finish my model. I asked Sempi if he could find me the matching pair. He took that piece I had in my hand, looked around him to see if can spot it's match. Then threw it away and told me, "Appa, you don't need that piece".

My son recently started going to a Montessori pre-school. It's a great school and I have nothing but great things to say about the teachers and the administrator.

They perform various activities in class which starts with simple things such as cleaning a set of wooden blocks, then building shapes from it etc. The idea is to learn from the larger community of fellow students and learn how to behave in his community (his classroom). He is taught good manners such as covering his mouth when he coughs, conflict resolution and sharing. It is working remarkably well. I've noticed that he now waits his turn to play with a toy instead of grabbing it from the other kid or asks the other kid if he could play with it when they're done. I beam with pride when he does that.

But I've often wondered if it is the right education style for him. The Montessori principle as I understand is that the kids learn through work. It is a very disciplined system and I've often heard guides (teachers) say phrases such as "No, that is not an option" when the student tries to test the boundaries.

I am of the opinion that "Well-behaved kids rarely make history". I love the fact that when I ask him "Would you like one pancake or two?" he answers "Three". He reminds me of Calvin and Hobbes. 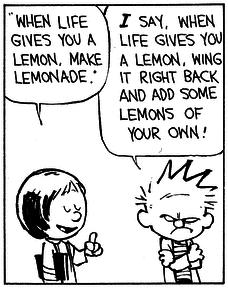 I definitely don't want my son to grow up to be a felon, but at the same time I don't want him totally domesticated either.

I trust the teachers in his class to balance the discipline with creativity thus helping him grow as a well-adjusted individual whose creativity isn't extinguished.

As a parent how can I do to help them achieve this goal? Are there measures that I should follow to check his progress in both lanes?

How can I encourage him to push the boundaries without burning himself severely? Can I test his boundaries by suggesting rule breaking?

I would love to hear the thoughts of fellow parents or teachers.

If you have suggestions please get in touch amjith.r@gmail.com or twitter: @amjithr

ps: I should point out that this is my own opinion and Yoshi (my wife) doesn't quite agree.

I am a big fan of Nina Simone. I like singing her songs out loud. Particularly this song with the following lyrics:

I sing this song to Sempi with a twist. I sit him on the dining table for his breakfast and I sing

I've been singing this to him ever since he could sit straight. This morning I sat him down and started singing as usual.

Sempi: I'm not yours. I belong to amma.

Me: Oh yeah? Well your amma belongs to me.

Sempi: And you belong to paati (his grandma, my mother).

Me: Who does your paati belong to?

I cracked up when I imagined my dad wearing a bib, sitting on dining table waiting for his breakfast.

Sempi and I are playing early in the morning on a Thursday.

Me: I have to go brush my teeth.

Me: I have to get ready to go to work.

Sempi: No. Don't go to work. Do inside work. (that's his phrase for working from home).

Me: No, Sempi I have to go into work today.

Me: Because "The Man" wants me to come into work. (You should know that I troll my son... a lot).

Sempi: What Man? Who Man?

At this point I start brushing my teeth and Sempi comes into the bathroom and still curious about the man.

Sempi: Which guy? Is it Joe? (Joe is my teammate at NewRelic).

Watch out Joe, he was a bit upset about me leaving to work and he thinks you're the "Man".