Some nights I read a book about Gandhi to Sempi for bedtime. There is an incident in Gandhi's life when he's thrown out of a first-class coach in South Africa because he is not white. I told Sempi that it was an injustice and it doesn't happen anymore.  He listened intently and nodded approvingly. The next night I'm reading a comic about superheros and he asks me, "How come everyone in Justice League is white?".

I stuttered to come up with an answer at that moment, cursing myself for introducing him to the concept of race.

Since then he's asked me to read the Gandhi book many times and we talk about the struggles, non-violence and civil disobedience.

Recently, his elementary school teacher did a fantastic job of introducing the struggles of Martin Luther King Jr. He was excited to learn about MLK and how he learned some of the techniques from Gandhi and Thoreau. So naturally, we bought a new bedtime book about MLK.

One night we had this exchange.

Sempi: Appa, how did the first person came into existence.

Me: (I was gearing up to talk about evolution, Adam and Genesis).

Sempi: Appa, if there was a single person in the beginning, then we all came from that person.

Me: (excitedly) That's true. Everyone in the world is related. You're probably related to Ms. Cochran (his elementary shcool teacher).

Sempi: (giggles) Hehe. It also means that Martin Luther King could be my relative. Hehe.

Me: Absolutely!! You know MLK and Gandhi were probably your great great grandfathers.

One of the ways we trained Sempi to say "Please" and "Thank you" is by asking him "What do you say?" after he receives a favor from someone. With that context in mind, this conversation happened in the car.

Vian: Can I have that monster truck, Sempi?

Sempi: What do you say, Vian?

Sempi just shakes his head and mumbles something that vaguely sounds like "Kids these days".

It was a cold Sunday morning. Sempi doesn't want to leave the house. I'm trying to convince him to go out for family brunch. Yoshi is still getting ready.

Sempi: I don't want to go. I want to stay home and play legos.

Me: If you want to stay home, that's fine. I'm going out for brunch.

Me: I'm taking Vian with me.

Sempi: Ok, you can take Vian and I'll stay with Amma.

Me: Nope, I'm taking my wife with me.

Me: Alright, hurry up and put on your shoes.

Sempi: Hold on, let's wait for our wife.

Sempi's new obsession is playing police. Every chance he gets, he recruits me and Vian to play police.

Sempi: Appa, let's play police. You can be the bad guy and I'll be police

Me: Alrighty then. I'm glad we settled that.

It is freezing outside. We bundle up and go out to explore. When we got back to our lodging it was warm and cozy. Yoshi decided to make everyone hot cocoa.

She brings the cups of hot cocoa and the bag of marshmallows.

Yoshi: Vian, how old are you?

Yoshi: You can have 2 marshmallows for your hot chocolate.

Vian: Yay! (and proceeds to grab a handful of marshmallows and dumps it into his hot chocolate). 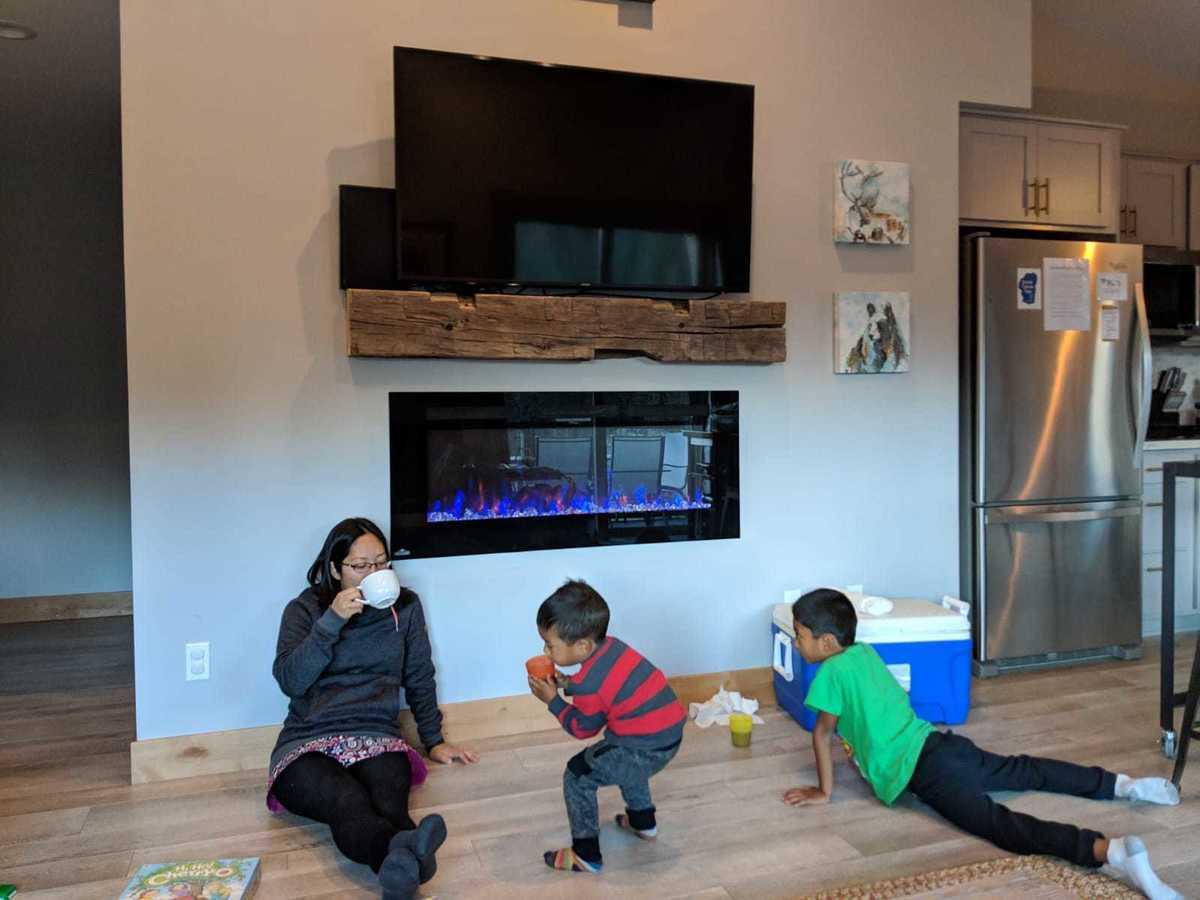